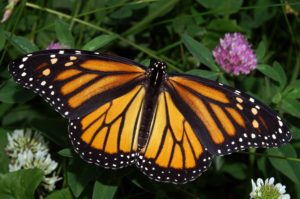 America. It’s large size with brilliant orange, black, and white colors are impressive. More importantly, their majestic flight and migration behavior has intrigued scientists for more than a century. In W.J. Holland’s publication “The Butterfly Book” (1898) he stated that “It is not believed that any of them hibernate in any stage of their existence.” It was not until 1975 that one of the central Mexico overwintering sites was discovered and a tagged monarch from Ontario, Canada was found. This discovery proved that monarchs can travel great distances and hibernate (diapause) as adult butterflies. At the same time, California coastal overwintering sites were being discovered and recorded.

The common name monarch was first published by the naturalist and lepidopterist Samuel H. Scudder in 1874 because “It is one of the largest of our butterflies, and rules a vast domain.” The species Danaus plexippus may be found on several continents and countries other than North America, including New Zealand, Australia, Canary Islands, United Kingdom, Hawaii, and Cuba. Today the monarch butterfly is the Official State Butterfly (or insect) in seven States: Alabama (1989), Idaho (1992), Illinois (1975), Minnesota (2000), Texas (1995), Vermont (1987), and West Virginia (1995).

The earliest record of overwintering monarchs on the coast of California is from 1869 in Monterey County. People probably did not notice monarchs roosting during the winter before the arrival of eucalyptus trees in the early 1850’s because they were greatly camouflaged on native tree leaves in remote areas; especially western sycamore (Platanus racemosa), Torrey pine (Pinus torreyana), Monterey pine (Pinus radiata), and Monterey cypress (Cupressus macrocarpa). In 1904, entomologist V.L. Kellog was the first person to infer that monarchs migrate in California.

In the 1920′s eucalyptus trees were well established along the coast of California as ornamentals and windbreaks. They became the favored roosting trees for monarchs because of the protection they provided from rain, wind, and chilling temperatures. By 2011, more than 210 coastal sites from Mendocino County to south of Ensenada, B.C., Mexico, have been recorded and more are discovered every season. At least 80% of these sites are eucalyptus groves.