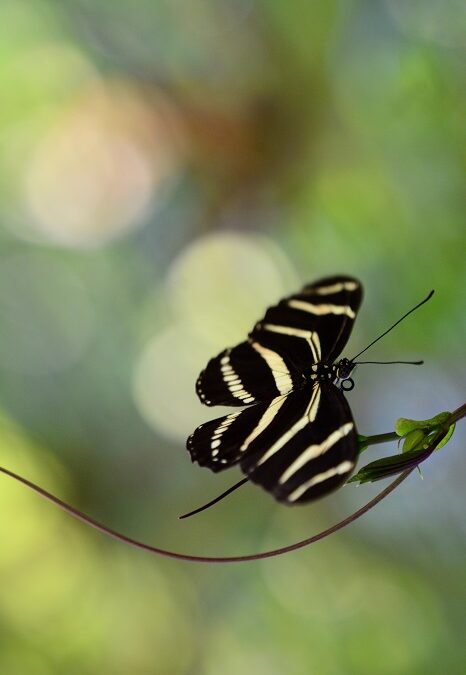 In 1961, mathematician and meteorologist Edward Lorenz was running a simulation meant to predict the weather over an extended period. When he saw a segment wanted to run again, rather than starting over he entered the data specific to the segment directly from the computer’s printout—which had been rounded to the nearest thousandth to save room on the paper. He started it back up, and went for a cup of coffee. Lorenz returned to a simulation drastically different from the first. He realized that entering the rounded number – .506 – and not the actual number – .506127 – as an initial condition, had caused a huge and unpredictable variation in the results of his weather model. It was a difference so slight it could be caused by the flapping of wings. This fluke of printing practices in the ‘60s led to the discovery of one of the founding ideas of chaos theory. He later gave a talk, titled (at the suggestion of a colleague), “Does the flap of a butterfly’s wings in Brazil set off a tornado in Texas?” Lorenz’s discovery eventually became known as “the butterfly effect.”

The concept that small causes can yield large effects has been recognized and discussed by many people, long before and ever since, in mathematics, philosophy, physics, as well as (my personal favorite) fiction. Ray Bradbury’s A Sound of Thunder (1952) describes a time traveler who inadvertently steps on a butterfly in the Late Cretaceous period only to return to a changed future. Stephen King’s 2011 novel, 11/22/63, follows a man who prevents the assassination of President Kennedy to a drastically different outcome than he had anticipated. There was even the feature length “The Butterfly Effect,” in 2004, starring Ashton Kutcher as Evan Treborn, who visits his own past repeatedly, each time making small changes and creating unpredictable results in his present.

Although Lorenz’s Butterfly effect was meant to conceptualize changes of initial conditions in nonlinear systems, the popular use of the term has come to mean that small efforts can have a massive impact. So let’s apply it to a more literal question: Can planting a butterfly and pollinator friendly garden help save the humans and the planet? The answer is: Yes. Restoring the pollinator population will keep plants healthy and reproducing, which in turn helps prevent soil erosion, improves water quality, provides cover and food for native wildlife, and maintains essential biodiversity. Planting habitats for pollinators will also increase crop yields. In fact, one study found that pollination of pollination dependent plants by honeybees and wild bees increased yield quantity (and crop quality! Bigger, tastier, and more nutritious!) on average up to 62%.

Choosing plants that support pollinators may seem like a small thing, but, unlike Lorenz’s Butterfly Effect (or Bradbury’s, or King’s), it will have a predictable and lasting positive impact on our world.